Black Lives Matter – My story with feeling uncomfortable, listening and being a better support for my son Mazin.

When I got pregnant, I knew my child would be half black but it wasn’t even a flicker of a thought in my head that race would affect my baby.  I was naive to think there would be no identity issues, because in today’s world we embrace diversity, it doesn’t matter what colour your skin is, right?  But it does matter, and it does affect my son, and in turn myself.

Truth be told, I’ve been trying to protect and shield Mazin from racism since he was born.  Mazin was born in the US, and it was made clear to me fairly early on, that if I wanted him to experience more people like himself in his daily life we should move back to my hometown of Toronto before he started elementary school.  So, we moved back to Canada, a “cultural mosaic”.  I carefully considered where we would live, what school he would attend, with the intent of maximum exposure to different people and lifestyles. But the fact is, he was (is still) being raised by a white mother, and to a greater extent a white family.  His father and closest black relatives are an ocean away, a true divide between black and white.

From an early age he would bring things to my attention, questions concerning race, which I would explain or defend as “everyone is equal Maz”.  But now listening to black leaders, writers and activists, I see my mistake in trying to paint everyone under the same brush.  I have even realized that by trying to shield him from his father’s ‘radical’ (not really radical, just different from mine) thoughts and opinions has been an obstacle to his more-full experience as a young black man. Because let’s face it, he is black in society’s eyes.

I remember talking to Maz in my belly (I named him months before he came out into the world), and promising him that he would be able to do anything he put his energy and commitment into doing. I have always believed in the power of self- efficacy, and have done everything in my power to help Maz feel that he has control in how he takes on challenges and what successes he achieves.  I have tried to purposefully bring to his attention possible mentors that look like him; Obama is an example, a leader at the highest recognized level, raised by his white mom, to encourage Maz to see that anything is possible. So when I get asked “why do black students need their own awards recognition ceremony?”; or their own movement; why isn’t it “all lives matter?” This is what I say: black children need to see themselves represented in all areas of life, not just in sports and entertainment; they need highly visible role models in the arts, math and science, too. Kids deserve to grow up with hope, a sense of empowerment and accessibility to all that life has to offer in order to encourage strong self-efficacy.  The future generation needs to have more mentors that look like them, that they can look up to, that are successful. Hearing the frustration and anger from the black community right now, and in the world at large, is a call for action and real change.  Real change means change in the discriminatory practices seen throughout the institutions that govern us, as well as in the places that we support in our daily lives. This is what Black Lives Matter means to me.

I’m not sure where all this reflection will lead for myself, but I’d like to challenge us all to become more attuned to the voices around us that don’t look or sound like us. Being uncomfortable, and even anxiety with that discomfort, I think, can lead to greater awareness within oneself and maybe even lead to more discussions and positive change in the greater community out there.

In his 13 years on this planet, I have learned so much from my son, about racial injustice and social inequality, but more importantly I’ve learned to listen, and respect his voice. 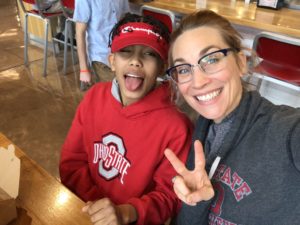